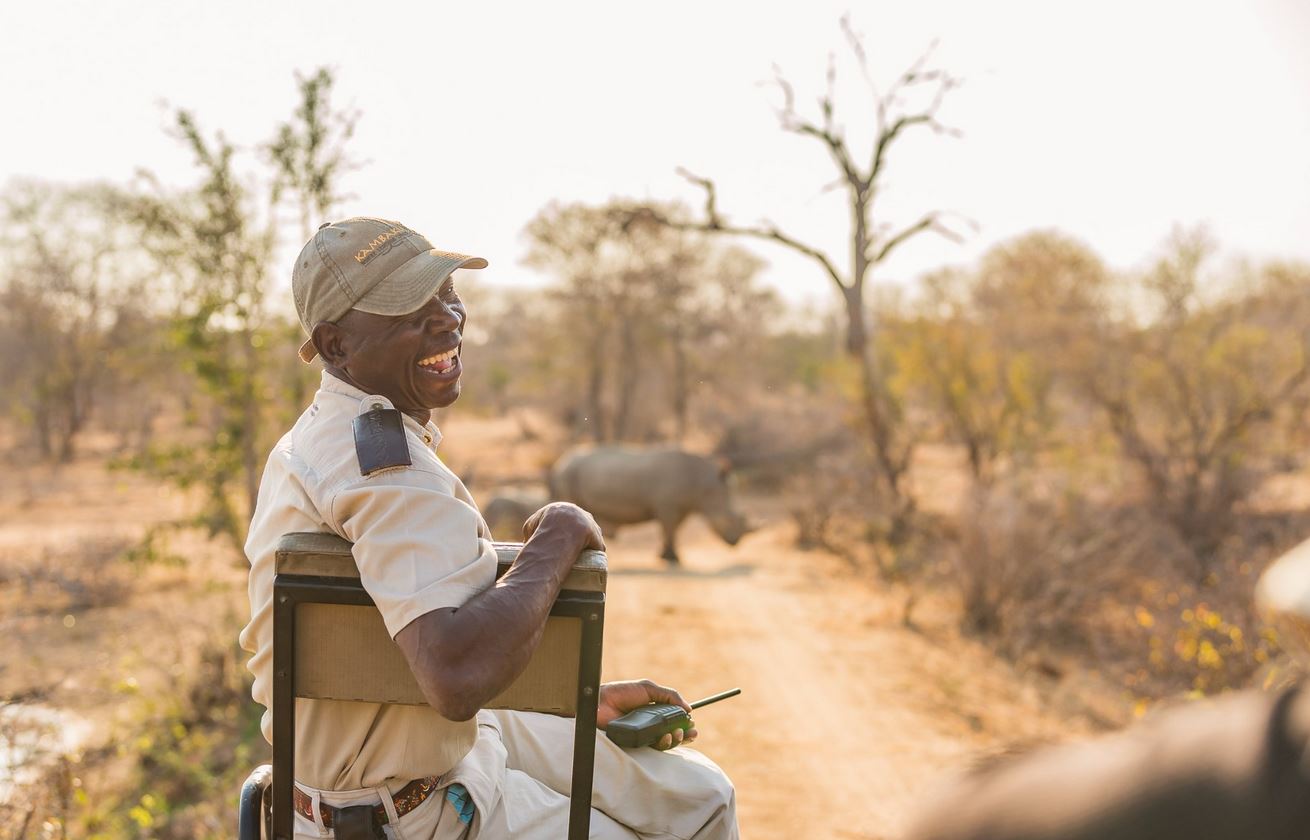 There are an estimated 100,000 reserves, parks and protected areas around the world, most of these are being protected tirelessly by rangers. World Ranger Day was created by the International Ranger Federation and was first held in 2007 as a way to honor these brave men and women who are committed to preserve the nature they are surrounded by.

We have decided to turn the spotlight onto Gideon Marvin Khosa, one of the long standing professional field guides at Kambaku Lodges.

Bryce sat down with Gideon and had a chat to help you get to know him a little better.

Q: Gideon how long have you been a professional guide and where did it all begin for you?

A: I started my career as a professional field guide over 20 years ago now in Kruger National Park under Dion Pienaar as my mentor.

Q: So your career started in Kruger – where else has it taken you?

A: After working in Kruger for a few years I spent some time in the North West of the country in Madikwe but returned to the Kruger region and found my home at Kambaku in the Timbavati.

A: I have a passion for walking and sharing knowledge on trees, plants, birds and the smaller things that make up the bush.

Q: If you could choose a favourite animal to view which would it be?

A: A tough decision but it would be a close call between elephant & leopard.

Q: I am sure you have had some amazing sightings in your career which one stands out for you as one of the best?

A: We had a sighting not so long ago not far from camp which really stands out.

We came across two large male lions known as the Maposa males on a young buffalo carcass surrounded by 18-20 hyenas. The hyenas were continuously pestering the lions and the sounds from both where just as amazing as the sighting itself. When we thought it couldn’t get any better a pack of 16 wild dogs arrived obviously attracted by all the noise and everything went crazy, eventually the two male lions chased everyone off and returned to finish their meal.

Q: Obviously guiding is your passion but outside of guiding what else do you enjoy?

A: Soccer and traditional dancing.

Q: What’s your favourite team both locally and internationally?

A: Kaizer Chiefs and Barcelona.

A: Locally Siphiwe Shabalala and internationally Messi and Ronaldo.

Q: The traditional dancing what is that all about?

A: It’s a tradition of my family the Khoza’s known as muchongolo. Every Sunday we dress in traditional clothing, animal skins, sandals, head bands etc. and perform traditional dances past down from generation to generation. We also do it as a life celebration of a family member at funerals.

Q: You are a proud Shongaan man tell us about your family?

A: My wife Tembe is also in the industry and works as a chef. I have three daughters, Pardon who is 24 and a nurse in Johannesburg, Trinity who is 18 and studying human resource management and Imbali who is 10 and still at school.

Q: Finally Gideon is there anyone you look up to in life?

A: Yes my uncle Nelson Theko he is a famer in Buffelshoek and has always been there for me.

We not only honor and celebrate Gideon and all the other rangers who form a part of our team at Kambaku Lodges but also those rangers who work throughout the Timbavati Reserve.