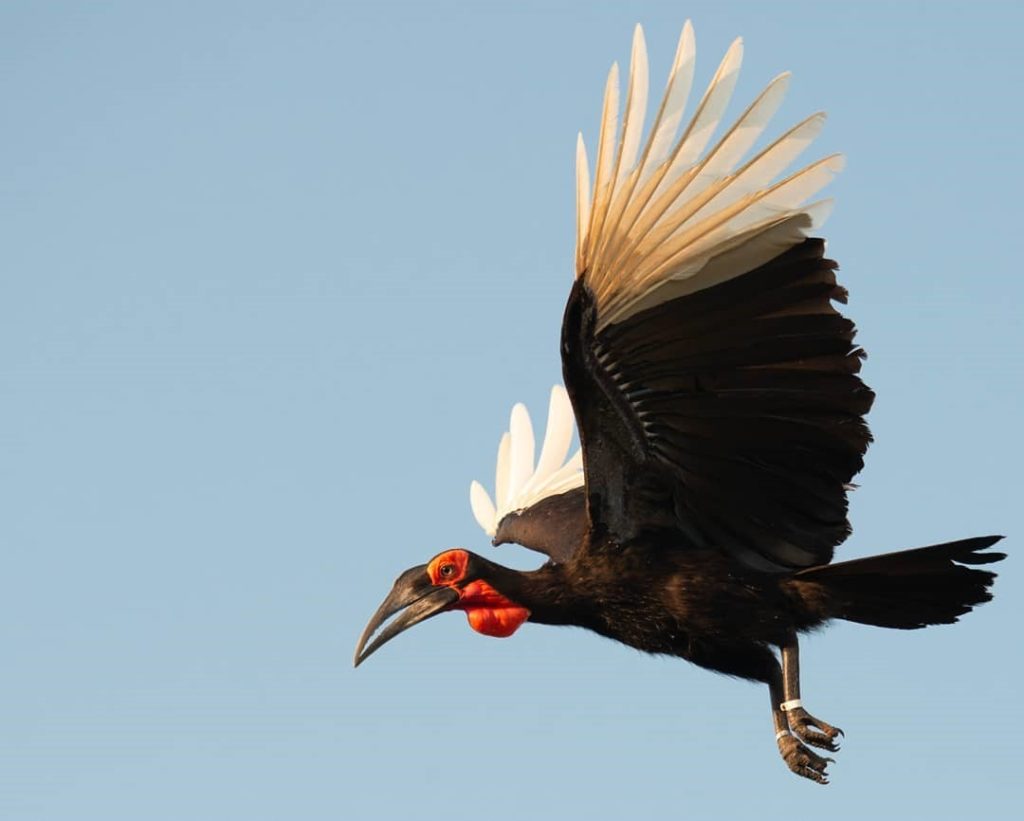 South Africa’s Bird of the Year for 2020 is the Southern Ground-hornbill. This may be the very first time you’re hearing of this remarkable species, but for safari lodges in the Timbavati Game Reserve it’s long been a spectacular sighting. Here’s everything you didn’t know you needed to know about this fascinating bird.

Sometimes called the ‘Lightning’ or ‘Thunder’ bird, it’s the belief of many indigenous SA cultures that the Southern Ground-hornbill is a symbol of the coming of life-giving rains. This worked very much in the Hornbills favour over many centuries, as it was sacrilege to kill them. However, this has not been the case for all cultures, and in some, they are seen as an unlucky bird instead.

As society has changed, and mankind expanded like never before, however, this hallowed status has begun to fade. Today, it’s estimated that there are less than 1500 individuals remaining. They’re rarely spotted outside the confines of protected areas like the Timbavati Game Reserve and the Greater Kruger. Deforestation, grassland reduction, poisoning and electrocution have decimated the species, as has the loss of large trees throughout the ‘urban jungle’.

The Southern Ground-hornbill, surprisingly, operates more like a pack than a flock. They’re very slow breeders, and only one ‘alpha’ pair will breed in the flock, but they will work together cooperatively in groups of 2-9. They will produce 2 chicks, only one of which will live to maturity, and the breeding cycle takes 9 years. They have lived up to 70 years in captivity.

This is no harmless seedeater! Smaller animals run for cover when the Southern Ground-hornbill is around, as they’ll eat almost anything that crosses their path- including small lizards, insects, rodents, tortoises and even weighty snakes like the puff adder!

The flock will gather before dawn for a ‘chorus’ of repeated low grunting that sounds almost like a far-away lion. The big red wattle under the male’s bill helps amplify this across wide distances, easily carrying 3km or more. In females, the wattle is violet. It’s thought that this chorus helps establish and maintain their territory.