Bird of the Year 2021: Cape Rockjumper 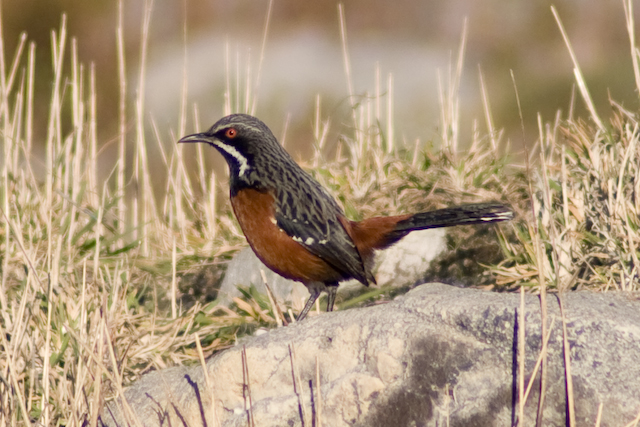 The Cape Rockjumper was chosen, by BirdLife South Africa as the Bird of the Year 2021. The main goal of this initiative is to raise awareness about this interesting little bird and in doing so contributing the conservation of the rockjumper.

The Cape Rockjumper is endemic to the mountain fynbos region of South Africa. This medium-sized bird is aptly named and can often be seen jumping across both rocks and grassland. The black and orange rockjumper seldom actually takes flight.

They are facing some challenges and are particularly vulnerable to climate change and habitat loss and are currently classified as ‘Near Threatened’ by the International Union for Conservation of Nature.

Cape Rockjumpers forage on mountains and slopes for insects like caterpillars, moths, grasshoppers and beetles. They will also eat geckos, scorpions and spiders.

You can find the Cape Rockjumpers in family groups consisting of a breeding pair and one or two of the offspring from the previous season. The breeding pair build the nest together and share incubation responsibilities. They generally build their nests on the ground under rocky overhangs.

While you are not likely to spot this pretty little bird at Kambaku Lodges, if you are in the Western Cape are, be on the look out for them!